As the head of customs enforcement for São Paulo, Brazil, Breno Andrade Soares Silva has seized illegal goods of every imaginable type: guns, drugs, cigarettes, clothes, electronics, boats—even airplanes. Usually the items are destroyed, auctioned, or donated to schools. But sometimes, when deemed appropriate, the seizures find their way back to the customs agents for official business.

One such seizure stays with Silva throughout the day: an Apple iPhone. It’s his official work phone. It came to Brazil illegally and ended up in Silva’s pocket after customs caught it being smuggled in.

“Sometimes we need a phone to work inside Receita [customs]. Or when we leave for an operation, then we pick up a phone that was confiscated,” says Silva. “I have no way to track where that phone came from.”

In Brazil, tariffs and taxes can drive the cost of a new iPhone to over $1,200, so hundreds of thousands of original and counterfeit phones are smuggled into the country every year through airports, seaports, and across thousands of miles of land border.

Apart from technical specifications, Silva’s phone has something else in common with the smuggled smartphones that are flooding Brazil and markets all over the world—it was stolen in the United States.

Phones stolen in the U.S. have been found on every continent on Earth except Antarctica. Because smartphones are so small and valuable, sophisticated criminal enterprises are increasingly trafficking them around the world. And like drugs, the phones stolen through street theft and fraud schemes in the U.S. are part of a complex underground global trade.

About two-thirds of American adults now own a smartphone. That has nearly doubled since 2011, as the devices have gone from accessories to necessities.

These necessities aren’t very expensive when compared to phones in other countries. In the United States, phones are subsidized through contracts with carriers on a level not seen in most of the world. This puts more phones on the street to be stolen and sold in countries where they’re just as necessary, but far more expensive. 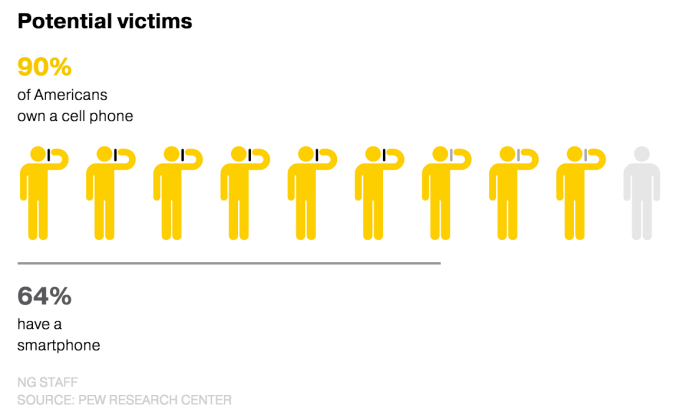 In 2014, 2.1 million smartphones were stolen in the United States, according to a study from Consumer Reports. In fact, roughly 50 percent of all thefts in major U.S. cities involve the taking of a cell phone. The San Francisco-based cyber security company Lookout reports that one in ten smartphone owners is a victim of phone theft.

Law enforcement agencies and lawyers with Sprint say many phones stolen on the street end up being sold abroad. But not all phones in the global illegal market are stolen on the street. Some are purchased fraudulently from mobile providers. In a common scheme called “credit muling,” criminals either bribe or trick people—sometimes people from vulnerable communities—into bulk purchasing contract-subsidized cell phones.

“Often [the buyers] are homeless, they’re runaways, they’re people who society in some ways has disregarded” says Jeff Tsai, the Special Assistant Attorney General with the California Department of Justice. “From there, those phones are often shipped overseas.”

The phones get overseas in a variety of ways. But according to court records and investigators, a common scheme operates like this: A stolen phone is sold to a buyer or “fence” for cash. The fence collects phones and sells them in bulk to a seemingly legitimate cell phone repair store. The store often has international connections and will buy phones no questions asked. At the repair shop, the stolen phones are bundled with other phones obtained illegally through credit muling, identity theft, and other schemes. The bundled phones are packaged in boxes, placed in luggage, or even put in shipping containers.

Authorities have made some major busts of smuggling operations recently:

According to numbers gathered by Sprint lawyers during court proceedings with traffickers, the vast majority of the stolen phones reviewed were sent to Hong Kong, where Sprint attorney James Baldinger says they’re “unlocked, re-flashed, re-kitted—which means they’ll get put in a new box with new accessories and with an instruction manual that’s in the language of whatever the destination country is.”

The destination country can be anywhere the phones might fetch a high price—countries like Brazil, where subsidies aren’t common and various fees hike the legal price of cell phones into the four-figure range.

From 2013 to 2014, Brazilian Customs reported a 30 percent increase in seized electronics, including phones.

São Paulo “is where most smuggled and counterfeit goods are,” says Silva, the head of customs enforcement. “We are in the heart of all this, an area that supplies most places in Brazil.”

The surging demand for smartphones has been driven by the same rapid economic growth that has made Brazil one of the largest economies in the world.

“If you don’t have Whatsapp, if you don’t have Facebook, there are places where you wouldn’t even get a job. The apps nowadays force you to evolve and update your cellphone because the ones that work in the old one don’t work in the new one,” says Luiz Carlos da Silva Junior, a resident of the Santa Marta favela in Rio de Janeiro.

In general, Brazil loses $35 billion a year to illegal trade, according to Edson Luiz Vismona with the National Forum Against Piracy and Illegality (FNCP). He argues that the cost of illegal trade extends beyond economic or tax losses because much of the profits fuel other criminal practices done by trafficking organizations across Latin America.

Interpol reports that cell phone theft organizations smuggling across borders in Latin America make an average of $550,000 per day. Many of these traffickers are connected to drug cartels that are increasingly investing in smuggling cell phones because they are considered low risk and high reward compared to narcotics.

Law enforcement and governments have struggled to find solutions to phone trafficking. California, led in part by San Francisco District Attorney George Gascón, has been on the forefront of the efforts. The state passed a so-called “kill switch” bill last year. As of July 1, 2015 phone manufacturers have to include security software in all new smartphones sold in the state that allows owners to remotely disable a stolen phone and render its software inoperable. Gascón says the point of the kill switch is to eliminate the incentive for stealing phones in the first place.

Minnesota passed a similar kill switch law in 2014, and eight other states have begun the legislative process to follow suit. Two bills currently in front of Congress could make the kill switch a federal mandate.

In 2013, Apple added the “activation lock” feature, which is essentially its version of a kill-switch. IPhone thefts in San Francisco have dropped about 40 percent since Apple introduced this security feature. In the same amount of time, the theft of Samsung phones—which didn’t yet have this kind of software—increased by 12 percent.

While kill switches may work domestically, the tool is far less a deterrent for international smugglers, who can reprogram phones to work on local networks. And some investigators have speculated that the kill switch may only encourage traffickers to steal phones through fraud schemes instead of street robberies.

“The kill switch really doesn’t have much utility if the phone is shipped out of the country. It’s something that is better to have one, than not to have one, but it’s certainly not a silver bullet in solving the problem,” says Sprint attorney James Baldinger.

While many experts and law enforcement organizations celebrate kill switch laws as a step in the right direction, some worry the technology alone is not comprehensive enough to eliminate the issue altogether.

Simple economics dictate that as long as the technology in American pockets continues to hold so much value, the international black market for smartphones will continue to thrive. Brazil already has more cell phones than people—more than 200 million phones are circulating, and the demand is only growing.

“It’s an arbitrage opportunity where you have a market inefficiency where one person in the market is willing to pay a higher price than the other person,” Tsai says. “You’re going to find someone who’s going to make a profit off that.”