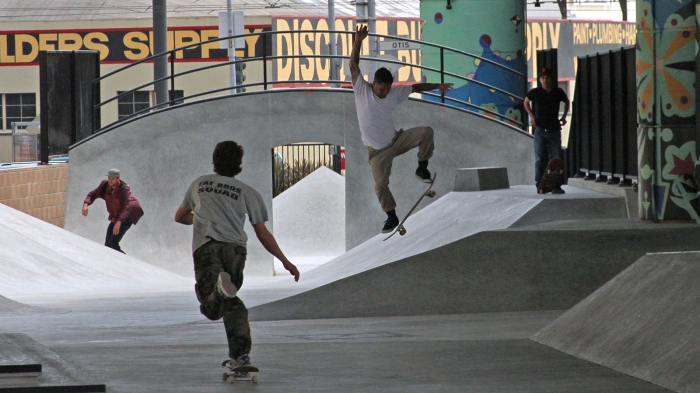 Last Tuesday was the park’s “soft” opening, but Mohammed Nuru from the Department of Public Works said enthusiasm for the new space meant shooing away eager skaters who wanted to get into the park early.

“In this part of the city there is not that much open space,” he said. “So this becomes a very critical area for the density and the people who live around the new park.”

Built under the Central Freeway where U.S. 101 turns into Octavia Street, the new space is part of a larger city plan.

“Like many cities, areas under freeways have become a little blighted,” Nuru said.

The DPW is working to develop areas that became accessible with the removal of the freeway structure in the decades after the 1989 Loma Prieta earthquake.

Several community meetings were held to better understand what residents near the freeway wanted. The answer was a place for dogs and skateboarders.

Plans for the SoMa West park began in 2009. Nuru said the city had to work out a deal with Caltrans, which owns the space. More than five years and $3.3 million later, the park is opening, complete with two dog runs — one for big dogs and one for little ones.

Before noon on Wednesday, more than 50 skaters of all ages were trying their boards on the new ramps and rails. Several of them liked the fact that the park is more tailored to street skateboarders, with wide-open spaces, stairs to jump, ramps to launch from and rails to grind.

Sean Carabarin, 30, came to check out the park on Wednesday before heading to his hotel job in downtown San Francisco.

“I like it, it’s fun. There’s a lot of stuff,” he said. “One thing I don’t like, it’s crowded already, but it’s given, you know?” Carabarin foresees he’ll be visiting the ramps three or four days a week, depending on his work schedule.

When David Rosenberg, 34, isn’t riding his skateboard, he’s a local high school English teacher. He said, “New parks bring old men out of the woodwork.” Rosenberg gives the new park a “thumbs up.” He’s been at the park twice in the days it’s been open.

Professional skateboarder Karl Watson, 37, came from Oakland with his 15-year-old son to check out what SoMa West has to offer. He said that eight years ago the local skateboard community had slated this part of the freeway underpass for a do-it-yourself skate park. Watson said what the city did with the space is a lot better. “It’s a lot cleaner. A lot safer. No nails sticking out.”

The SoMa West park is the newest addition to the area under the Central Freeway. A block away from the new ramps and artificial grass, construction has already begun in the McCoppin Hub Plaza. Once a seedy dead-end parking lot sandwiched between a liquor store and a U-Haul truck rental, the cul-de-sac will soon be a food truck court.

Eventually the DPW is planning to host an official opening event for the new skate park/dog run.

“As we have seen, the neighborhood was very anxious to get in there,” said Nuru, “but it’s open now and there’s people enjoying it.”

Skater Carabarin thinks the park is good for the local community. “I think skateboarding is one of those things that teaches kids from a young age to old age how to interact with one another. There’s no prejudice inside of it,” he said. “It kind of breaks those barriers. And it’s fun.”