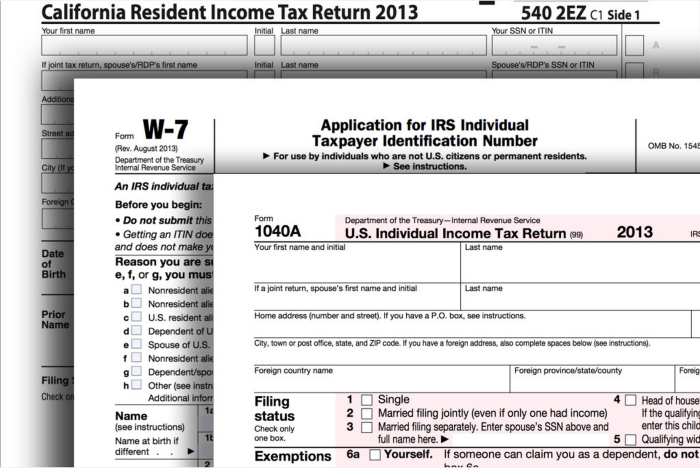 On the Monday before taxes are due almost every seat in the waiting room at the Mission Economic Development Agency’s (MEDA) Free Tax Preparation Program was filled. As workers bustled around carrying big folders and envelopes in their hands, a group of tax preparers debated bringing another person to help.

Already this year MEDA and three other free tax services in the Mission have seen more than 3,100 clients. Last year more than 4,000 people sought out free tax prep in the Mission — roughly a quarter of them were clients using an Individual Taxpayer Identification Number known as an ITIN, a sign that the client is probably undocumented.

“The IRS doesn’t care if you’re here illegally as long as they can collect the money,” said Max Moy-Borgen, MEDA’s Tax Program Lead.“The IRS and ICE don’t talk to each other,” he said, referring to the Immigration, Customs and Enforcement.

The Institute on Taxation and Policy estimated that in 2010 the more than 11 million undocumented immigrants in the United States paid some $10.6 billion in state and local taxes alone.

At MEDA’s site at 19th and Mission, 35 percent of the 2012 tax filings used ITIN numbers. For first-time filers that means sending in tax documents with an ITIN application, which can take three to six months to process.

Once someone has their ITIN they can file electronically like anyone with a social security card can — but ITIN numbers only have a five-year shelf life because the IRS discovered people used to sell or pass on their cards to others.

But why would an undocumented immigrant want to go through all that to file their earnings anyway?

Many undocumented workers have fake social security numbers for their jobs — and just like anybody else they have taxes taken out of their checks. While fear of coming in touch with a government agency may deter some — the benefits of filing as an undocumented immigrant go farther than a refund.

Students who live in states that allow them to apply for financial aid must have some kind of proof of income for needs-based grants and scholarships. And having a legal record of being in the states can help when filing for residency or citizenship.

Also, if you’ve been an undocumented immigrant filing taxes and then you get legal status, all of the social security and Medicare money taken out of your previous paychecks transfers with you.

Undocumented employees already pay into these systems but nothing comes back to most of them. According to the Social Security Administration, of the $15 billion paid by undocumented immigrants and their employers in 2010, they only received $1 billion. That same year $2 billion unclaimed dollars went to Medicare and $8.7 billion to Social Security.

Then there’s the same reason any of us want to file: the potential for getting a big fat check.

“Sometimes we see families that get refunds up to $10,000,” Moy-Borgen said. “That first year they feel like they’ve won the lottery.” He said later clients come to depend on their refund — especially those whose household earnings may only be $20,000 or $30,000 for the year: the average for their middle to low-income clientele.

Although the clients at MEDA were too busy to speak to a reporter, it turns out it is easy to find an undocumented person working in the Mission who has filed with an ITIN.

Jose, 36, moved to the United States seven or eight years ago. He came with a visa but became undocumented after he lost it.

He got his ITIN number after someone at the Centro Laboral de la Raza, a nonprofit in the Mission,  recommended it.

“I did it so I would have a history of residence in case the immigration reform passes,” he said.

Jose likes filing his taxes because so far he’s only received refunds. This year he earned $35,000 as a butcher in the Mission.

Jose’s three kids — 12, 9 and 5 years old — go to school in the Mission. He plans to spend his refund on their education needs.

“People are eking their way by in San Francisco and we really see that here,” said Angie Minkin, a 60-year-old retiree. She’s one of about 100 volunteers at MEDA helping people file their taxes.

MEDA’s tax prep program is part of VITA, the Volunteer Income Tax Assistance created by a professor at Cal State Northridge in 1971. Then students did taxes free of charge for low-income taxpayers. The program is now a nation-wide volunteer initiative run through the IRS to help educate communities about how to do their own taxes and to meet the cultural and linguistic needs of different people.

Take Victor, who declined to provide his last name, for example. With a bright blue accordion folder tucked under his arm, he shuffles into the waiting room in jeans, a baby-blue polo and a brown corduroy jacket. The polite 65-year-old man has been getting his taxes done at MEDA for about five years.

Originally from El Salvador, Victor moved to the States from Australia 15 years ago. He’s been out of his home country for 30 years and is a U.S. citizen but still prefers to speak in Spanish: a need that is easily filled at MEDA. Throw in the fact that everything is free and you’d expect to have a repeat customer.

“It doesn’t matter if it’s free,” he said. “It’s like a restaurant. If the food is good but the service is bad, you won’t go back.”

Through a free workshop on building credit provided by MEDA, he learned about an unidentified transaction on his credit card statement from a few years ago.

The volunteers at MEDA are now helping him through the process of erasing this charge. “It’s an excellent help to the community,” he said.