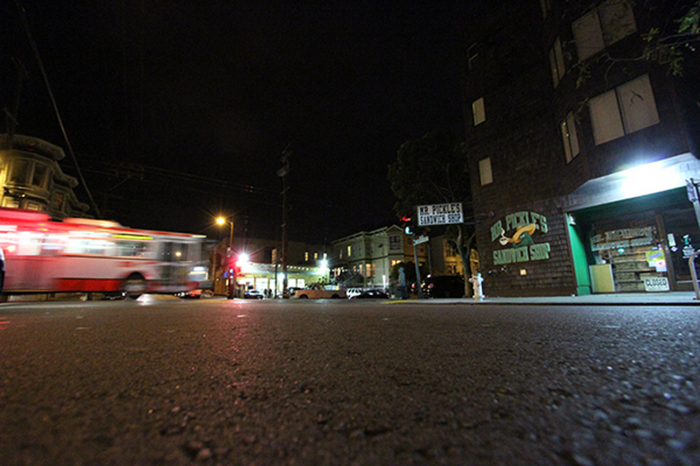 This much no one disputes: a grainy surveillance video from outside of Mr. Pickles Sandwich Shop on 20th and South Van Ness shows a man stumbling into the frame and slumping against a tree around midnight on October 30th, 2012. Jose Matias-Aguilon had been shot. Just 28 years old, he died later at the hospital from a bullet wound to the chest.

From there, the assistant district attorney, Danielle Douglas, and public defender, Christine Schenone, don’t agree on much. The prosecutor says Sterling Samm, a 21-year-old high school dropout from San Pablo, is guilty of a street robbery gone horribly wrong. The charges — robbery, attempted robbery, felon in possession of a firearm and murder — could put him in prison for life. Schenone says he was coerced into an alleged false confession and the lack of gunshot residue on Samm’s hands proves his innocence.

As he was led into the courtroom at the Hall of Justice Wednesday morning, Samm gave a quick, shy smile to family members sitting in the front row of the gallery, four women and a teenage boy. Samm’s roughly six-foot frame looked slight in his black suit, a neck tattoo peeking from the top of his white button-down shirt, and a fresh-looking fade hair cut. Behind Samm’s family sat a half dozen Matias-Aguilon supporters, stoically observing the closing arguments of the trial that has been running since mid-December.

Over six tense hours, the two attorneys used the evidence to weave completely divergent tales of that night in the heart of the gentrifying Inner Mission. Samm and the victim ran in the parallel world that intersects with the cupcake shops and $10 cocktails, the one that still claims several lives a year in the neighborhood, murders mostly only announced to the city at large with street-side altars and short blurbs in the newspaper.

During breaks on Wednesday, the supporters of Samm and the victim sat on opposite sides of the hallway, huddled together in fast conversation. Back in the gallery, they left an entire row empty between them.

The trial of Sterling Samm is complicated by a second defendant — a 14-year-old boy, whose case was siphoned into the anonymity of juvenile court. The teen and Samm were arrested close to each other, although not together, near 21st and Folsom streets minutes after the shooting.

In the courtroom, Douglas, the no-nonsense prosecutor with her dark hair pulled into a tight bun, stood directly in front of the jurors and argued that the teen and Samm were in cahoots on an armed robbery spree, and had already mugged a pedestrian 20 minutes before and a few blocks away from the shooting.

Schenone strode around the courtroom in a pinstriped suit, countering that no evidence points to Samm being part of the earlier armed robbery.

Yet there’s no denying what’s on Samm’s taped statement to the police — the foundation of the prosecution’s case. At Mission Station in the early hours of October 30, Samm first denied any involvement in the homicide, according to the prosecutor, but then altered his story: he and the teen had, indeed, attempted to rob Matias-Aguilon, but when Samm reached for the Latino man’s wallet, the victim pulled at the revolver Samm had pressed to his chest and it fired, said the prosecuting attorney.

“My money got funny,” said Douglass, quoting Samm’s statement, then arguing, “He was trying to get easy quick money from vulnerable victims in the Mission.”

Schenone, the public defender, disparaged the police interrogation — saying that the inspector coerced Samm, who suffers from ADHD and is uneducated, into a false confession with death penalty threats. She argued the gun was not shot at close range as Samm claimed, because there were no marks on the skin around the victim’s gunshot wound.

In her closing arguments before the jury Wednesday, the prosecutor said Samm was lucid, and didn’t act like he had downed a pint of vodka and been high on pot, as the prosecutor said he told the cops after they picked him up. (The police didn’t breathalyze or test him for drugs, Schenone says).

Schenone argued that no one else identified Samm as the shooter that night. One of the witnesses of the fatal shooting said the gunman wore sweatpants. When police arrested Samm later that night near 21st and Folsom — he was wearing jeans and a red t-shirt. A woman who was nearby told dispatchers she’d seen three or four short Latino men fleeing the homicide scene. “I don’t think anyone in this room, in this building, would call this man, a short Hispanic man,” said Schenone with both hands on her seated client’s shoulders.

In a 911 call, the earlier robbery victim described the black man who’d held him at gunpoint as standing five-foot-six. Samm is six or seven inches taller. Later that night, the same victim didn’t identify Samm in a photo lineup. It wasn’t until the trial, 13 months after the shooting, that the victim testified that Samm had held him at gunpoint. (When Douglass brought up that trial identification, one of Samm’s family members in the gallery whispered under her breath, “Yeah, a year later.”)

Then there’s the issue of the gun. The prosecutor’s forensic expert said the mortal bullet is a clear match to the .38 caliber black revolver found in a dumpster with two hoodies on Shotwell Street, a block away from the crime scene — and the prosecutor argued it was Samm’s gun from the alleged earlier robbery. The public defender’s expert countered that the gun and bullet didn’t match at all, and that police didn’t recover any gunshot residue on Samm. (There was, though, residue on the 14-year-old, both attorneys said).

“We have direct evidence of innocence,” Schenone, the defense attorney, argued: she said there is no proof Samm was at the first robbery, nor that the black revolver in the dumpster was his, nor was it actually the murder weapon, given that it was never tested for residue.

Yet Douglas rebutted the potential hole in her case about the residue. “In every single case there is going to be evidence you don’t have.”

“We didn’t meet the science when it came to this case,” she said, “but it was the only .38 revolver found dumped in the area.” It was the same kind of gun that would fit the bullet that killed Matias-Agulion, she continued. “There is no reasonable doubt in this case.”

Judge Jeffrey S. Ross acknowledged the difficulty of the jurors’ task. “This is a challenging case for everyone.” Those were “two of the best closing arguments I have ever heard,” he said to the attorneys after the jurors had left the room. “Both of you have done an extraordinary job for your respective clients.”

The two competing tales also left lots of room for debate. The 12-person jury — black, white, and Asians of varying ages and both genders — deliberated Thursday morning, and are expected to continue Friday.

As Samm was being led out of the courtroom by the bailiff on Wednesday, he turned quickly to blow a kiss toward his family, and they blew one back.

Correction 01.13.2013 10:25 a.m.: The story previously stated that Judge Jeffrey R. Ross commended the attorneys in front of the jury – but the jury had already departed when he complimented their work.